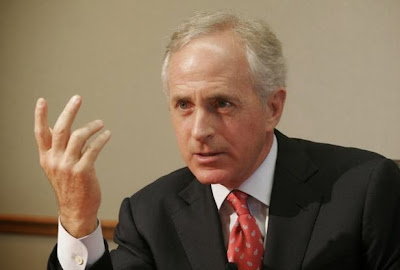 On December 12, the Senate Banking, Housing and Urban Affairs Committee held a hearing on last month’s interim nuclear agreement between Iran and the P5+1, which means there was a tremendous amount of ignorant bluster, conventional wisdom, wishful thinking, staggering ignorance, and shameless posturing for lobbyist money on display. In other words, Congress members were speaking about Iran.
While nearly every single word uttered by the Treasury Department’s David Cohen and Undersecretary Wendy Sherman – the State Department’s number three and lead U.S. negotiator in Geneva – and her Senatorial inquisitors could (and should) be fact-checked and debunked, in the interest of time and sanity, I will address only a single statement that cried out for correction (and will maybe get to more at another time).

Midway through the hearing, Senator Bob Corker of Tennessee claimed Iran is “wreaking havoc” in the Middle East, lamented that the United States is “ceding much of Middle Eastern activities to them,” and expressed his frustration with the recent deal and any prospect of alleviating sanctions for fear that Iran may not be seen as a “rogue nation,” but rather “part of the international community.”

Corker further opined that the P5+1 deal has “no sacrifice on their part whatsoever, none. They’re still spinning 19,000 centrifuges every single day.”

This has recently become a canard in mainstream, usually hawkish, discourse on Iran’s nuclear program.

In October, Joel Rubin of the Ploughshares Fund, who is described by Voice of America as an “Iran expert,” said that Iran “does have 19,000 centrifuges spinning.”

Following the release of yet another speculative study by career alarmist David Albright of the Institute for Science and International Security (ISIS) and an error-riddled USA Today article noting that Iran currently has “19,000 centrifuges” installed in its two enrichment facilities, this talking point gained even more traction.

On October 29, neoconservative operative Kenneth Timmerman wrote in The Washington Times that “the [Iranian] regime now has 19,000 centrifuges, including several thousand high-performance, new-generation machines they are still testing,” and has already amassed a stockpile of uranium that, “with further enrichment… is enough for roughly 10 bombs.”

In late November, Sarah Stern – head of the Endowment for Middle East Truth (EMET), an extreme right-wing Zionist messaging organization that proudly describes itself as an “unabashedly pro-Israel and pro-American think tank,” and who serves as an advisor to the creepy propaganda outfit The Clarion Fund – claimed that, for Iran, the interim accord “keeps every one of its 19,000 centrifuges spinning.” A graphic on the EMET website states that, as part of the deal, “Iran gets… 19,000 cylinders spinning enriching uranium.”

On December 1, Senator Jim Inhofe called the deal a “reckless gamble” that, among other things he doesn’t like, “allows [Iran] to keep its nearly 19,000 centrifuges spinning.”

The very next day, KT McFarland, a Fox News contributor and former aide to Henry Kissinger and Ronald Reagan, declared, “It’s just crazy, there are 19,000 centrifuges spinning in Iran, that’s twice as many centrifuges in Iran as there are Starbucks in America.”

According to the most recent assessment – from mid-November – by the International Atomic Energy Agency (IAEA), which conducts routine inspections of its nuclear program, Iran is reported to have installed roughly 19,000 centrifuges in its two enrichment facilities at Natanz and Fordow.

But they’re not all spinning. Not even close.

The IAEA even provided a handy little graph along with its report showing the difference between what Iran has installed and what is actually operational. At most, Iran has about 10,000 operable centrifuges, all of which produce enriched uranium far below levels required for a nuclear weapon.

Furthermore, the IAEA notes, “Not all of the centrifuges fed with UF6[feedstock] may have been working.” 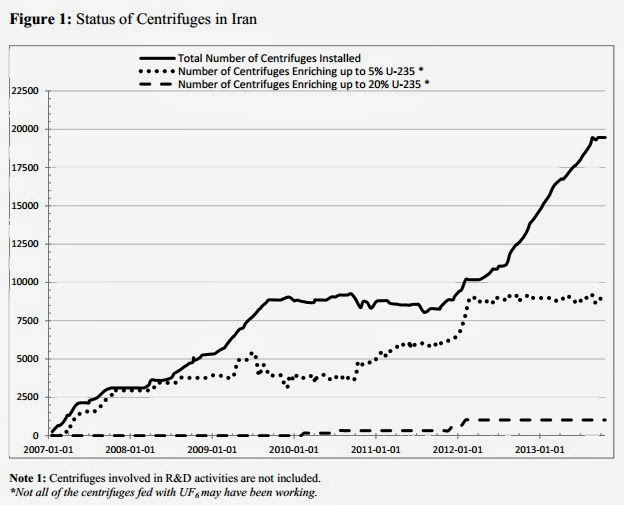 Roughly 1,000 second-generation centrifuges have also been installed, but not a single one has yet been used.

So, while Bob Corker and the rest sound pretty serious when they fret about Iran’s 19,000 “spinning” centrifuges, they’re overselling what Iran is actually doing in order to gin up their required hysteria.