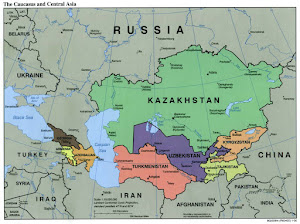 The Great Game Round-Up brings you the latest newsworthy developments regarding Central Asia and the Caucasus region. We document the struggle for influence, power, hegemony and profits between a U.S.-dominated NATO, its GCC proxies, Russia, China and other regional players.

While tensions are mounting in eastern Ukraine after U.S. Vice President Joe Biden had instructed Washington’s puppet regime in Kiev to ignore the Geneva agreement and escalate the situation, the European Union sent two of its most notorious warmongers to another front in the new Cold War against Russia. The Foreign Ministers of Germany and France, Frank-Walter Steinmeier and Laurent Fabius, visited Georgia and affirmed plans to speed up the signing of the now infamous EU Association Agreement with Russia’s southern neighbor: